Cryptocurrency Mining in the Digital Cloud

Cryptocurrencies have besieged the modern-day global economy as ferociously as a flash flood and as covertly as a plague of moles. 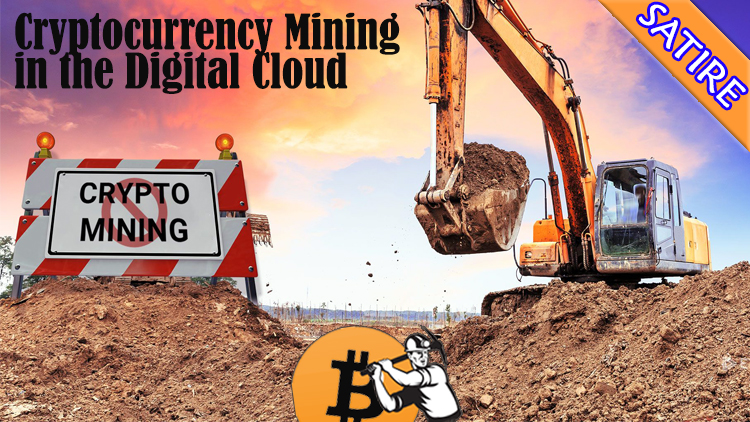 What's the difference between digital 'cryptocurrency mining' and 'gold mining'?

There's not as much as you'd think, to the extent that digging and drilling for loot doesn't require shovels and drills anymore.

Thanks to the modern machinations of digital connectivity, Mining can also be done electronically with shiny gadgets, servers, PCs and lots of cabling — not to mention a comfy seat.
Cryptocurrencies have besieged the modern-day global economy as ferociously as a flash-flood and as covertly as a plague of moles. It is now common parlance to hear people say: "I am thinking of mining for cryptocurrencies because Bitcoins are worth $15,000 each," and, "I want to buy equipment and mine Bitcoins to be rich.”

Soaring lithium prices spurred dozens of lithium miners into lithium exploration, and so too it seems have Bitcoin prices. A circa 1,500% inflation rate in 2017 has enticed many profit-seekers into trying Bitcoin mining. You could even go so far as to say, there’s a bit of a crypto gold-rush going on out there.

As an industry, Mining has existed since the first civilisations, but courtesy of the digital realm, mining isn’t restricted to excavating rocks and soil only. Digital landscapes can be mined just as vigourosuly as physical terra-firma (if not more so), using computers and an internet connection. Crypto-miners are now recognised professionals and crypto-mining is a recognised industrial niche just like Commodities mining.
In simple terms, mining for cryptocurrencies is essentially ironing out the creases in accounting and transactions on a network. The equivalent of rounding up or down each transaction to make sure the overarched bookkeeping is precisely accounted for.

But is this really ‘mining’, or ‘peer-to-peer bookkeeping’?

Three Senior crypto-mining pioneers from a Canadian cryptocurrency mining consortium answered some questions, to shed some light on this new mining niche.

“Crypto-mining is simply a method of finding the little crumbs of digital value everyone else left behind or hasn’t noticed,” says Sir Godfrey Goodspeuwe, Chairman of the ‘Crypto Realtime Yield Miners Society’ (CRYMS), a privately-held consortium of digital geologists based in Ball's Falls, Ontario. And the way I see it, there is a clear difference between low-impact surface drilling for modest returns, or, high-impact deep-cloud mining whereby we drill into the blockchain ore-body for a truly stellar return on capital expenditure,” says Goodspeuwe.

According to CRYMS, its sole purpose is to "assist themselves and their clients in obtaining the highest-grade cryptocurrencies, with the most cost-effective capital expenditure structure known to computer science."

"My highly esteemed colleagues and I, have conducted extensive cloud-based blockchain-penetrating radar tests, scoped more than one million miles of fibre-optic cabling and assay-tested more than a thousand blockchain drill-core samples, to obtain a clearer understanding as to where all the crypto resources are buried," says Goodspeuwe. I am reliably informed by my Right Honourable Friends, that arrangements have already been made to commence reverse-circulation drilling into the Bitcoin-blockchain ore-body within days,” he adds.

How does CRYMS’ version of cryptocurrency-mining differ to the traditional bookkeeping version, or actual commodities mining for that matter?

“It’s just not economically viable to be running several PC’s that cost several thousand dollars, expending lots of power and leaving rooms the same temperature as a sauna – just to scrape together a few dollars per week. That’s not mining in our book. Here at CRYMS, we’re looking to take cryptocurrency mining to the next level whilst remaining insulated by its inherent privacy.”
So, as large gold majors such as Newcrest Mining trudge off into the field in search of gold nuggets and gold mineralisation, CRYMS whizzes into action in search of crypto-nuggets and crypto e-commercialisation.

"You bet-ya ass, that’s the kind of strategic addressable-market targeting we pride ourselves on, here at CRYMS,” insists Maximillian Greenback, Chief of Operations at CRYMS.
"We go out there and drill some firewall holes to see if we can hit somethin' high-grade — and if we do — we syphon it all up into a secure wallet right away. It all happens in seconds. The actual commodity miners are missing a beat 'cause it takes years to get any decent returns, even when they know where the locked mineralisation is buried. I’m mo' of a pragmatist and I likes my extraction-rate high from day one and I likes to keep it there on a shoe-string budget while I’m at it.”

“With CRYMS, the entire procedure is very similar but quite different. Once we know where the crypto-chunks are likely to be, we go in quick and silent, to make sure we mine as much as possible before anyone else hears about it or jumps in for a taste.”

“Another difference is that Resource companies publish what they’ve gone and found, but we don't do that. We only publish what we find when someone compels us. For the time being, that happens to be happily paid-up clients and intrigued family members with a sudden interest in the Bitcoin bandwagon. Lemme tell ya, clients compel me to publish what we do under threat of no future business while my family compels me to tell them everything with emotional blackmail. My wife does it all the time, dammit," groans Greenback.

Crypto-mining is typically done with large AC power requirements and state-of-the-art computer equipment; how does CRYMS manage to obtain a sufficient level of operational capability without going over-budget or crashing the power grid?


"Gimme a break pal. This ain't Hollywood although I wish it was. At CRYMS, we deploy disruptive technology at the most opportune time, to ensure the blockchain works for us rather than against us. In other words, we utilise computers that are currently idling on standby and not being used by anyone. My heart breaks seeing all those PCs just goin' to waste like that, dammit. We like to utilise the Sharing Economy where possible and we endeavour to inform PC-owners that we’ve commandeered their machines, but, given the large amount of changing connections, that’s not always possible...unfortunately," says Greenback.

"We also deploy weekly rest-and-relaxation inducements to the guys over at Ontario Power to make sure our electricity supply is always prioritised and never compromised, so everythin' is okily-dokily on that.”
"Once we’ve drilled into the blockchain, we’ll clarify how permeable and porous it is and how many Bitcoins we can extract without compromising the common perception that the Bitcoin ledger is impregnable. It most certainly is…but let’s just leave it at that,” whispers Greenback. "And call me Maxi," he adds, with a sly smile.

In other words, CRYMS uses the most advanced computing techniques to arbitrarily pick up goodies falling out of the pockets of internet-surfers and e-commerce activity?


“Yes and no. That’s just the alluvial stuff which is rather low-grade compared to the deeper blockchain-protected mother-load that we know is there. We’re using our low-grade material to fund the deeper drilling activity and hope to bite off a mammoth multi-million tonnage Bitcoin ore-body in the near-term,” says Maxi.

"Companies dig commodities out of the ground all the time, so why can't we dig out crypto-currency from the cloud? Maybe we'll see Uncle Sam or that Canadian whatchamacallit come in on this with some clarified legislation, but in the meantime, we’re cashing in.”

But what about common law, current legislation and prevailing laws and regulations? Is any of this legal?

"Good God Sir, that's the most beautiful thing about it," exclaims a disgruntled-yet-deliriously-perky Sir Godfrey. The digital realm is superficially regulated with the entire regulatory framework infrastructure not adding upto a row of beans. It's a genuinely legal free-for-all, and CRYMS are the front-runners, let me assure you,” he says.

“Neither I, or any of my Right Honourable Friends at CRYMS, have any reservations about earning breath-taking wealth on the back of the Bitcoin-hype sweeping the world. We're just here to sweep up some jolly coin for ourselves, just like in the good old days, that's all."
Mining conditions have been fruitful in recent months for CRYMS, as a junior explorer with first-entry into virgin digital territory that has never been mined before. Having commenced commercial operations in mid-2017, CRYMS has already dug up and distributed more than 80,000 Legitimate Over-the-counter Operational Tonnes (LOOT) of cryptocurrency to various parties globally.


What are the current and forecast company metrics for CRYMS?

“In order to make our operations rudimentary yet concealed; we've simply mimicked the current crypto-valuation structure using satoshis to make Bitcoins. We like to do our accounting with tonnes for bitcoins, kilograms for 10 million satoshis and grams for 1 million satoshi batches. It works well because it makes us appear like a bonafide digital mining company to the untrained observer,” says the beaming Goodspeuwe.

CRYMS expects to sign an off-take deal later this year, thereby guaranteeing the offload of at least 150,000 tonnes of LOOT (150,000 bitcoins) and earning an undisclosed pro-rata commission for every satoshi (microgram) it excavates. 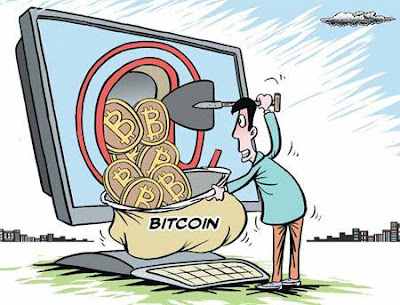 “With Bitcoins trading at fifteen giblets [thousand] a pop right now, we're loving it," says Greenback. "At the end of the day, we excavate Bitcoins and offload them onto God knows who because it’s all anonymous."

"Such a ripe market could potentially welcome competition and government regulation, but that's just a perception. In reality, the first thing we did after mining our first few tonnes was to cut some cheques and wing them onto the appropriate gatekeepers at the SEC, NFA, CFTC and FINRA, in the US alone. Think of any alphabet-soup agency you can imagine, and we've already mined the coin to cover it!” exclaims Greenback.


Do you have any strategies to fend off competition?

“As an example of our market-management strategy, last year we created an off-book lobby group called ‘Mine Your Own Business’ (MYOB), led by the licentious Miss Goldie McBloom, a veteran campaigner for online privacy and financial secrecy.
“My sole mission is to shed teeth and nails for CRYMS to keep all its mining activity private at all costs. This is done through a variety of ingenious loophole-exploitation strategies,” says McBloom.

“We have prepared several excellent arguments for cryptocurrency mining activity to be respected in doctor-patient confidentiality agreements, whistle-blower protections, attorney-client privileges, religious freedoms, right to self-expression and free-speech. We can prove cryptocurrency is a hobby which means it can be used to relieve stress, serve as an escape from persecution and could even be considered as a form of art."

We’re working on registering CRYMS as a charity and an officially recognised religious denomination in order to add further layers of legislative protection for CRYMS and its clients.”

“At MYOB, we’re confident that with all that ammo in our arsenal, we will filibuster any civil court judge into submission,” espouses the jubilant McBloom.
With this level of openness and transparency backed by disruptive technology, it is expected that the Cryptocurrency Revolution will transform society for the better and provide both financial abundance and independence for everyone on a silver platter.

As Bitcoin valuations climb to new highs, we remain bemused by the rampant growth of cryptocurrencies, and yet, we cannot help but remain transfixed on this evolving market niche with baited breath.

Let us leave the last word to Sir Godfrey, who may have said it best: “Godspeed to cryptocurrencies, the ever-useful dastardly servants yet dangerous masters nevertheless.”

Quite possibly a nugget of truth for us all.